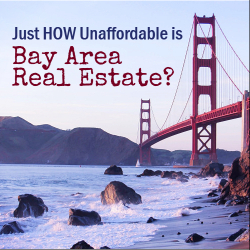 For decades now, the Bay Area has been one of the most expensive regions of the US and even “The World”.  Right now, Bay Area home prices are at an all time high.  The median price paid for a home in the 9-county Bay Area in June was $735,000.   If you only include the “inner” counties of the Bay Area (Marin, San Francisco, San Mateo, Alameda, and Santa Clara), that figure is well over $1,000,0000.

Home Price Affordability is at somewhere between 12 and 19% for the inner Bay Area counties (12% for San Francisco, 14% for San Mateo, 17% for Santa Clara, 17% for Marin, and 19% for Alameda)   This means, for instance, that only 12% of San Francisco residents can afford to buy a median priced San Francisco home (~1.5M), even with a 20% down payment in hand.  This percentage is calculated based on the median household income for residents of the given county, the minimum qualifying income for a median priced home with 20% down payment, and assuming that no more than 30% of the household income is used for the housing payment.

Thinking of moving out of the Bay Area because of this craziness? By comparison, Tennessee, for example, is filled with affordable counties. In RoaneCounty, part of the Knoxville metropolitan area, just 10.1% of one’s annual income will get you into a median-priced house. Average annual wages there are $60,294 and the median-priced home costs just $85,000.   Compare that with MarinCounty, where average annual wages are in the same ballpark — $67,223 — but the median price of a home is a whopping $1,160,000!!

Let’s look at a couple of other out-of-state comparisons:

The national average median income in 2015 was $56,516. For San Francisco, it was $88,518—substantially more than the national figure, but a clear indication that most San Franciscans pay over 40% of their income just for a roof over their heads. In fact, the latest figures for San Francisco reveal that the share of income spent on rent is 46%, way up from 31% historically. And the share of income spent on mortgage payments is 41%, up from 39% historically.

In my opinion, the affordability constraint is the main thing holding Bay Area homes prices from going up at a sharper rate than they already are.   It will be interesting to see if the massive disparity between income and home prices eventually starts to discourage a lot of tech workers from coming to the Bay Area and/or encourages more to move out of the Bay Area.  Up and coming metro areas like Portland, OR, Austin, TX, Raleigh, NC, and parts of Colorado have well established technology centers and home prices which leave room for a lifestyle where a majority can actually “own” a house (or Townhouse/Condo) and for renters to at least have a decent amount of money left over from each pay check to save or spend for leisure.