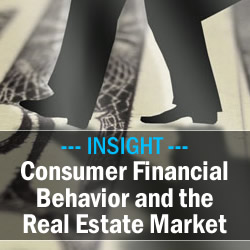 Understanding consumer financial behavior is essential to any type of business, but even more so to the real estate business, which is the first to drop and the last to grow during economic cycles.  The reason behavioral knowledge and insight is so important is because the link between consumer financial anxiety, consumer behavior and the real estate market is very strong and significant.

The most relevant and significant behavioral orientation to the real estate market is the “Castle Craze”.  As soon as the economy improves and starts to show meaningful signs of growth, consumers return to their favorite “sport” — bigger and better homes.  The Castle Craze behavioralogy is about consumer fascination with bigger, better and nicer homes the moment they feel that the economic storm is over.  Clearly, real estate, specifically the primary residence property, is very appealing — not just from a practical perspective of a place to live and for investment reasons, but also as a statement of status and achievement.

The main factor in the Castle Craze behavioral orientation is the amount of money consumers spend on their homes, in terms of building supplies and gardening equipment during good economic times, compared to other types of spending.  To demonstrate the Castle Craze behavioral orientation, I selected the four-year period prior to the actual start of the Great Recession, from February 2003 to March 2007.  Keep in mind that although the official start date of the Great Recession was December of 2007, the actual decline in the economy started about six months prior to that because it takes two consecutive quarters of negative GDP to declare an official recession.  Thus, the actual decline in economic activities started in the second quarter of 2007.

The enormous increase of nearly 38 percent in retail sales of building and gardening supplies, compared to other retail areas, is a clear indication of consumers’ infatuation with building, improving and enhancing their homes during periods of economic growth and low levels of financial anxiety. Needless to say, this craze died right after the economy started declining in mid 2007, and although the real estate market is showing some signs of recovery at this time, mid 2013, it is very far from where it was during the growth years prior to the Great Recession.

It is also important to indicate that the growth figures in sales of building and gardening supplies are retail figures only and do not include large wholesale purchases of building materials used in the development of large housing and commercial complexes.  Thus, the increase in retail sales of building and gardening supplies during the four-year span we discussed earlier accounts for purchase by individual consumers and small contractors working mostly on smaller building or renovating projects.

Will we see another cycle of Castle Craze behavioral orientation down the road?  Yes, of course.  This was not the first, nor is it the last, economic cycle we are going to experience, and once the economy starts growing again, we will witness the same type of behavioral orientation repeating itself.  Why?  Because, as we discussed earlier in the book, human nature never changes, only circumstances do. Just as soon as the level of financial anxiety decreases and consumers feel more confident about the economy, they will be thrown back to building and remodeling their castle that was “neglected” in the last few years since the beginning of the Great Recession.

The link between a lower level of financial anxiety and a higher level of building materials is very good news for the financial industry, because when the Money Anxiety

starts declining, it means that consumers will start seeking mortgages for new homes, refinancing of existing mortgages, or home equity lines of credit or loans to finance the improvements they want to make in their homes.  Thus, financial and banking professionals should keep a close eye on the Money Anxiety Index for signs of consistent decline in the level of consumers’ financial anxiety, which is going to trigger the Castle Craze behavioral orientation.

Dr. Dan Geller is the author of Money Anxiety, a behavioral economics book showing readers how financial anxiety impacts consumer financial behavior and the economy. Dr. Geller is frequently featured in national and financial publications, such as The Wall Street Journal, The New York Times, Bloomberg/Newsweek, and has appeared on CNBC, Fox News Radio, and numerous other media outlets