You are here: Home / Archives for Donna DiMaggio Berger

Donna DiMaggio Berger is a Shareholder at the community association law firm of Becker & Poliakoff and has represented all types of shared ownership communities throughout Florida for more than two decades. Ms. Berger can be reached at (954) 364-6031 or via e-mail at dberger@bplegal.com. 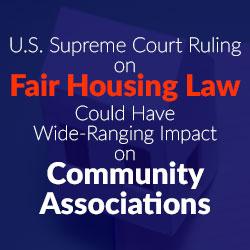 Significant U.S. Supreme Court rulings in 2015 which garnered a lot of media attention addressed diverse topics which included:  lethal injection; same-sex marriage; healthcare subsidies and pollution limits.  In addition, there was one ruling involving housing discrimination that could profoundly impact the community association industry. The 5-4 Supreme Court holding in Texas Department of Housing and Community Affairs v. Inclusive Communities Project, could have wide-ranging impact on community association boards. The case was brought by a Texas group which helps mostly lower-income black families find housing in the mostly white Dallas suburbs through the use of housing vouchers. Landlords receiving federal low-income tax credits must accept the vouchers. As a result, a disproportionate share of federal low-income tax credits went to landlords in minority communities.

The four dissenting justices (Roberts, Scale, Alito and Thomas) voiced their concerns that the majority decision was based on the Griggs v. Duke Power Co. case rather than focusing on the actual intent and text of the 1968 Fair Housing Act. In Griggs, 401 U.S. 424 (1971), the Court held that black employees could recover from their employer under  Section 703(a)(2) of Title VII of the Civil Rights Act of 18-964 without proving that the employer’s conduct (the employer required a high school diploma or a qualifying grade on a standardized test as a condition for certain jobs) was motivated by a discriminatory intent.

So how could the outcome of this case impact your private residential community?

Previously, a volunteer board of directors was diving into dangerous waters when it passed rules and restrictions with the intent to treat people differently. If a Board was not thrilled with having children in the community, a proposed rule may set the pool hours at 9-3 which coincidentally are also the hours that most children attend school. Often, it was not difficult to determine when disparate intent was involved in a Board’s decision-making protocol.

Under the new Supreme Court ruling, however, a board can now be held liable for housing discrimination whether or not anyone on the board intended to discriminate so long as the rule or restriction has a disparate impact on a legally protected group of people. Housing discrimination lawsuits can be very costly, time-consuming and can have a long-term negative impact on a community’s real property values.

Many boards and association members wish to contribute to the continued success of their communities by regularly amending their governing documents. Often those amendments allow elected boards to thoroughly screen prospective tenants and purchasers in order to ensure that newcomers will not present a financial burden on the association by lacking the resources to pay assessments and other monetary obligations to the association in a timely fashion. This rationale would seem to make sense since a delinquent owner who cannot pay his or her assessments timely and in full, passes his or her financial obligations on to the remaining members who must make up the budgetary deficit. Screening and approval restrictions are also routinely drafted to weed out applicants who present a threat to the health, safety or welfare of the community.

The Supreme Court’s dramatic shift in housing discrimination indicia forces us to more closely scrutinize restrictions which are fairly standard in community associations to eliminate any potential disparate impact concerns. How would the following association restrictions fare if evaluated under the new SCOTUS standard?

While the Texas Department of Housing ruling is a cautionary tale, volunteer boards still have a fiduciary duty to adopt and enforce reasonable rules and regulations so taking a “hands-off” approach is not a long-term solution.  Today’s board members will have to show that (a) they had a good reason for the rule or restriction and (b) there was no way in which to accomplish their reasonable goal in a manner which had a less disparate impact.